Australia - but NOT without a visa 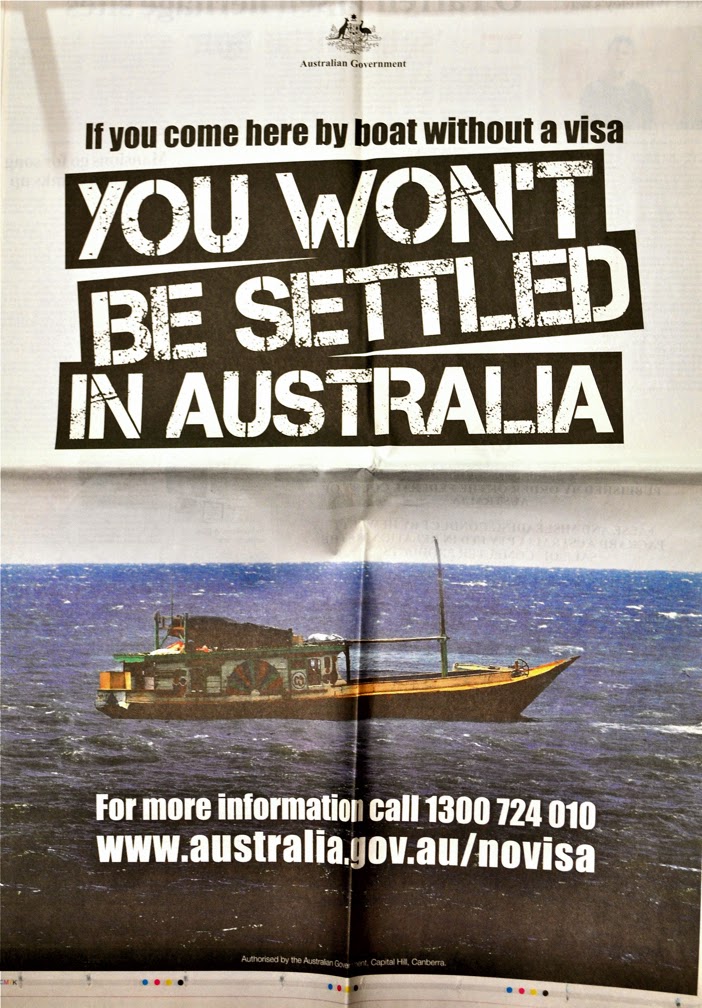 Please come through the front door with your visa and passport,
it is not advised to arrive via the back door, without papers, on a boat from Indonesia or elsewhere.
If you do YOU could be sent to Manus Island.
Have you heard of  Devils Island circa 19C or 'Dead Island'?
This is the 21C version.
Manus 'anus' the arsehole of Australia where ideological political excretement washed to shore.
Forever to be a stain and a stench on our national conscience.
Just another black moment of our history.
'The 'black armband brigades history of Australia'.
God despair our First Australians never stood a chance.

Artists statement:
The reference is to 'Rabbit-Proof Fence', an Australian movie, 2002, and the incarceration of Aborigines, the First Australians, corresponding to the internment of asylum seekers on Manus Island today.
There is a difference, the First Australians were displaced and dispossessed, asylum seekers sent to Manus Island have been misplaced.
On the other side of the fence, if a r'abbott was caged how loud would a r'abbott squeal?
The wire is also a reference to Amnesty International.
Manus Island is an internment camp which offers no hope to 'illegal' asylum seekers hoping to enter Australia by boat without papers.
An unfortunate internee was killed rather viciously by some nasty people just recently on Manus Island.
There was a protest last weekend about the political atmosphere in Australia generally and more specifically the conditions on Manus Island.
The theme of the protest was 'Not in My Name'.
In fairness to the elected Liberal Government the policies of offshore processing of asylum seekers arriving by boat and the subject of the poster above, dated July 2013, were  introduced by the previous Labor Government of Kevin Rudd: http://www.smh.com.au/federal-politics/federal-election-2013/kevin-rudd-to-send-asylum-seekers-who-arrive-by-boat-to-papua-new-guinea-20130719-2q9fa.html
A protest was organised through the online social community.
A March in March was held through the weekend of 15 - 17 March 2014 Australia wide.
It was held in Adelaide on Sunday 16 March.
The photographs below were taken by me at the protest.
Estimates of at least 125,000 people protested 'Not in My Name' throughout Australia last weekend and a petition was presented to the Government of Australia.
For more on this issue, the latest here:
http://www.independentaustralia.net/politics/politics-display/refugee-torture-and-the-darker-australia,6289

Posted by Australian Photograph Collector at 3:15 AM