While a student in my final year of the Advanced Certificate of Commercial Photography at Croydon College of TAFE in 1993 I had the privilege to work as an assistant at the Kodak facility trackside at the Adelaide F1 Grand Prix.
I was able to obtain my very first dye sublimation print from a negative taken by me of Eddy Ervine.
Today I had some fun copying slides taken at the Grand Prix. The copier was constructed in a few hours using an old slide projector. I removed the lens and the mains electrical wiring and installed an LED light. Diffusers were inserted made from crumpled baking paper and the lid from a takeaway container. Some minor alteration was required to enable the camera lens to be positioned  7cms from the slide carrier at which the 50mm 1.8 lens is in focus at infinity using a 36mm extension tube attached to a Nikon D90 body.
The 36 slide carrier protrudes in the way of the camera body but can be used from positions 15-36 without interference as the carrier loads 1 - 36 from back to front and moves towards the rear in use.
In effect I now have an automatic loading slide copier.
The slide of Alain Prost was the best obtained.
The last image of Aryton Senna's car is I believe from the 1988 AF1GP and was taken through the wire mesh safety barrier.The images are all copied from 35mm positive transparencies or 35mm negatives using my copier and are from various Adelaide F1GPs between 1985 - 1993.
I was fortunate to be invited to the farewell barbeque for Aryton at the 1993 AF1GP as he was leaving McLaren to join Williams. I took quite a few photographs of the presentation to him and have some interesting mementos from the occasion.
Tragically he died in a Williams car during a race the following year.
The last 7 images are of supporting events and the round of publicity takes and interviews.
The late Barry Sheen is wearing the Channel 9 jacket and Narelle Autio formerly of The Advertiser and now an acclaimed fine art photographer and wife of Trent Parke is shown standing with gear slung in the 4th last frame.
All text and images ©bill purvis 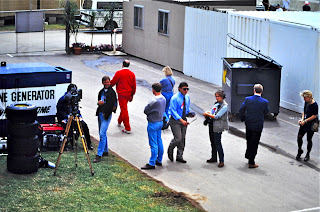 Posted by Australian Photograph Collector at 1:02 AM