John Martins Christmas Pageant
is an iconic South Australian event.
This 8mm Kodak colour film may be as early
as 1945/6,  probably later.
Nellie the mechanical elephant first? appears in a
1949/50 photograph.
The RAAF and RAN floats are fabulous as are
the colours in this footage.
The focus was just a little too close as can be seen
from the sharper detail in the ladies face in the
bottom of some frames.
©billpurvis

A time consuming 5 day project.
'Buckjump rider'.
8mm Perutz black & white film.
I have not been able to find any information
on Perutz movie film.
A rodeo possibly NSW maybe Queensland C1940's.
I cannot say no animal was injured because I
believe there is an element of pain inflicted to get
the horses to buck.

'A bag full of trouble'
A COVID-19* Production
inspired by the classic WW1 marching song,
'Pack Up Your Troubles In Your Old Kit-Bag'.
My biggest Gif to date 294 frames.
This project has kept me occupied and off
the street during the current Covid-19 crisis.
Please allow time for the frames to load
before the Gif runs smoothly.
©billpurvis

The light source for the latest postings of movie sequences
was from a lamp bulb mounted in a reflector.
Although I like the nostalgic look and colour of the sequences
I wondered if image quality could be improved.
I mused about using a condensor from a projector
which would produce more directional light rays.
A 7W LED Downlight with variable colour temperature,
of choice 5700K Daylight, was an inexpensive purchase.
And it mounted an exact fit to the rear of the condensor unit.
If I recall correctly from an Hanimex Slide Projector
I had disassembled.
The image below was taken with this light source. Missing the beach, the sand, the sun?
'Beach Radio'
A because I can production
brought to you courtesy Covid-19
An original 8mm Kodak Safety Film C1940's
Location Bondi? SYDNEY NSW
PostWW2
re-edited ©billpurvis 2020 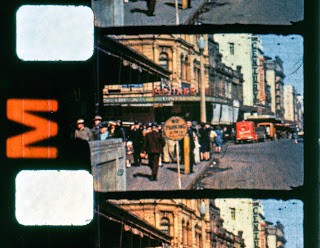 Keen movie buff and historian David Donaldson gave his personal insight into
the history of the buildings shown in this brief footage.
'I was enchanted with Soldier and the Tram.
Yes the Century cinema, Hoyts's home of romantic pictures,
THE MOON IS BLUE ran there for a full year.
And just down a bit is the Plaza, where Hoyts corporate office was upstairs.
Home of Cinerama while it lasted too.
And in 1952 where I first asked Rose to "the pictures",
the opening day of HIGH NOON which we both liked, a good sign.
It ran a healthy ten weeks there.'
David further added:
'out of picture opposite was mighty Hoyts Regent,
where with the legendary Ian McPherson (Mr film organiser)
I saw THE SEARCHERS on opening evening.
In large-negative Vistavision, blow your mind image quality.
And Greater Union's Victory just on down a little.
A real cinema-going precinct, George street, with half a dozen other
places not far away — then.'
Some wonderful personal insight Thank You David.

A project I started in 2016.
8mm movie film frames were copied with a Nikon bellows close-up
slide copy attachment mounted on a Nikon D90 body.
With restrictions imposed due to Covid-19 and residents
being obliged to avoid unnecessary travel, I have re-visited
the project I started back in 2016.
4 frames of the 8mm film were shot in one exposure of 35mm format.
The frames presented vertically aligned.
Each 8mm frame was copied to create a slideshow of 153 frames and
a Gif created using Photoshop.

©billpurvis2016
Posted by Australian Photograph Collector at 1:05 AM